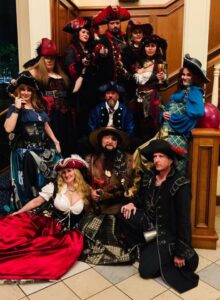 So, someone invited you to German Karneval and you have no idea what to expect?  Well, to begin with German Karneval is NOT American Mardi Gras.  The festivities you may have seen in New Orleans drew their beginnings from Karneval in Germany, but that's about it for what they truly share.

SO, WHAT IS GERMAN KARNEVAL?

Karneval in Germany began in the 16th century to allow commoners to mock the monarchy and politicians without fear of retribution, but it really took off in the 19th and 20th centuries.  Therefore many "official" Karneval costumes copy some of those old official uniforms and dresses.

Karneval is nicknamed "The 5th Season" in Germany and starts on November 11 at 11:11AM and lasts until Ash Wednesday (which is in February or March of the following year).

In Germany, the core time of the Karneval season are the two (2) weeks before Ash Wednesday. Some areas of Germany will basically shut down during the last week before Ash Wednesday – where people will party for 4-5 days in a row at street parties, bars, events, and in their homes.

On Rosenmontag (the Monday before Ash Wednesday) in the City of Köln (Cologne), over 1.5 million people will turn out to celebrate and to watch the 3 mile long Karneval parade. That same day, one could travel away from Köln and find other cities where 200,000 – 500,000 people have turned out for festivities in a particular city. The fact is Karneval is THE BIG EVENT during winter time in Germany.

While there is no “true” recipe for Karneval, most cities have certain traditions that have come forward from the 16th century. However, many traditions can and do vary from city to city, town to town. They do though, share a few common attributes:

ELFERRAT - the “committee of 11” are basically the organizers of the events. The Elferrat wears distinctive uniforms and - especially important - ”FUNNY” HATS.

ROYALTIES - most areas have “royals” that reign over the city during the Karneval season. The most common is a PRINCE often accompanied by a PRINCESS. The royals are surrounded by MANY "supporters” that have various functions (usually in a funny way)., e.g. there is a Prinzengarde (guard of the prince) - which may consist of (pretty) women - whose only task is to dance.

SHOW DANCE performances during the events - Some performances can be really artistic while others are just slapstick (i.e. men dressed as women). The performers are all amateurs, only performing during the season (but practicing all year long!)

ORDEN (medals) - every Karneval Club creates its own medal for each season. People dress up for Karneval events. The best comparison would be American Halloween. The big difference is that for Karneval people definitely dress up “funny”

FUN - the fun is mostly created by the audience by dressing up, dancing - and usually by a bit of drinking. However there are also more formal events where stand up (amateur) comedians provide quite a show, making timely fun of local or state events or themselves. Common rules are often abandoned, e.g. kissing strangers and provocative clothing (for women) is quite normal.

People need fun and relaxation. You had 4 weeks to clean up the Christmas tree, 3 weeks to recycle the bottles of the New Year eve party - now what?

GO TO GERMAN KARNEVAL!  WHAT CAN YOU EXPECT?

German Karneval in America follows more or less the rules and tradition of the “original” Karneval. There will be a program and there will usually be dancing. It will be a mixture of German Oktoberfest songs and other “normal” ballroom dance music. If you expect a rave party, this is the wrong place. The events will usually have a theme and you are strongly encouraged to dress to the theme - no limits set. You want to show off - and you can.

This way you can also go after one of the prizes in the costume contest! The program will have a series of formal steps, like marching in of the Elferrat and the royalties, greetings of guests and giving medals to honorees. But this is mixed with jokes and dance performances that often even
involve the audience. Don’t expect Circue de Soleil, but dances with a good beat, some slapstick, and unusual dresses will certainly entertain you.

The important part is you, the friends you bring, and perhaps a designated driver! Everything will be over by the next morning, and often you won’t leave until then. The evening, costumes, dancing and drinks, are meant to celebrate and enjoy the craziness and freedom of that night. You are certainly encouraged to dance - even if you can’t (you won’t be alone!) – Enjoy, this is Karneval!!!